Our Thanksgiving gift to the ecosystem is the biggest DPDK release ever, with:

The branch 20.11 should be supported for at least two years, making it recommended for system integration and deployment. The maintainer of this new LTS is Kevin Traynor.

Below are some new features, grouped by category.

More details in the release notes:https://doc.dpdk.org/guides/rel_notes/release_20_11.html

Below is the breakout of commits by employer: 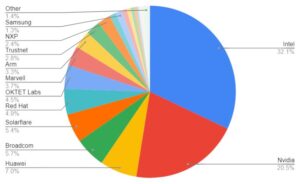 Based on Reviewed-by and Acked-by tags, the top non-PMD reviewers are:

New features for 21.02 may be submitted during the next 3 weeks, in order to be reviewed and integrated before mid-January. DPDK 21.02 should be small in order to release in early February:  https://core.dpdk.org/roadmap#dates

Thanks to everyone who helped make this release happen – what a great way to wrap up 2020!

SAN FRANCISCO – July 20, 2020 –The Data Plane Development Kit (DPDK) project, hosted by the Linux Foundation, consists of libraries and drivers to accelerate packet processing workloads running on a wide variety of CPU architectures, today announced the availability of a new white paper entitled, “Myth-busting DPDK in 2020: the past, present, and future of the most popular data plane development kit in the world.”

Produced by Avid Think and Converge! Network Digest with DPDK community support, the paper outlines the critical role DPDK plays in the evolution of networking infrastructure, while dispelling a number of myths and misconceptions about the technology.

“DPDK is a robust community that continuously adapts to shifts in technology with the goal of providing optimal value to the networking industry. As the community approaches the tenth anniversary of the project, we are pleased to release a thorough outline of DPDK’s capabilities and upcoming innovations,” said Jim St. Leger, DPDK Board Chair.

Topics outlined in the paper include:

Download the white paper and check out  related videos on the top 10 DPDK myths, here: https://nextgeninfra.io/dpdk-myth-busting-2020/

DPDK will host its annual DPDK Userspace summit as a virtual experience this year, September 22-23.  Userspace is a community event focused on software developers who contribute to or use DPDK, or are interested in doing so. The event includes presentations on the latest developments across DPDK, as well as in-depth discussions relevant topics to the open source data plane community. Registration is now open.