On ABI Stability, v20 in review

By DPDKDecember 16, 2020Blog
No Comments

In DPDK 20.11, the DPDK community adopted ABI stable releases with the aim of easing the adoption of new features for DPDK users. If ABI stable releases is a new concept for you, or to simply refresh your memory, please read the previous post on Why is ABI Stability Important? The DPDK community put the policies and mechanisms in place to make ABI stability a reality from DPDK 19.11 onwards with a commitment to reviewing progress after a year. A year has now passed, so how did things go? The good news is that 100% backward compatibility was preserved through all the quarterly releases since DPDK 19.11. 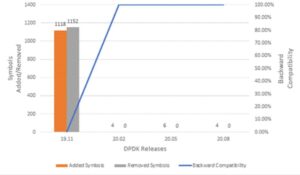 100% compatibility means that a packet processing application built with DPDK 19.11, works just as well when upgraded to DPDK 20.08. This is crucially without necessitating an application rebuild, making for seamless upgrades. This is during a period when significant new features were added to DPDK, such as Cryptodev support for ChaCha20-Poly1305 AEAD for example. To really understand what DPDK ABI Stability means for a DPDK user, watch the demo …