Why is ABI Stability Important?

Most open-source software projects follow distinct life cycle patterns as they evolve from the genesis of a idea, all the way through to a mature stable well-defined project. You can see this evolution reflected in all aspects of the project. Upstreaming rules for instance, are usually permissive in the early days and then become gradually more conservative and risk adverse over time. Similarly, you expect lots of bugs in the early days, then things becomes more tested and stable over time, and so on.

This life-cycle is also evident in a project’s management of it’s application binary interface, usually shortened to ABI. Before continuing, two things should be pointed out;

In the early days of a project, ABI changes are rarely given any consideration as you are usually way too busy trying to change the world! Then time goes on and the project becomes popular. The more users join the project, and become dependent on it, the more time you spend making sure that you don’t break their software.

At the extreme end of this cycle are very mature projects like the Linux Kernel. Linus Torvalds explains Linux’s commitment to maintaining a stable ABI in his own words.

“We care about user-space interfaces to an insane degree. We go to extreme lengths to maintain even badly designed or unintentional interfaces. Breaking user programs simply isn’t acceptable.” – Linus Torvalds, 2005

There are a few distinct patterns of ABI management, between fledgling and very mature project’s like Linux.

In some software libraries, an evolutionary pattern is very clear, that is they follow the common pattern of an unstable ABI in their early day’s and then after some period of settling they declare a 1.0 release and their ABI is more or less set in stone from that point on-wards. The GStreamer (†) project is good example of this form evolution. 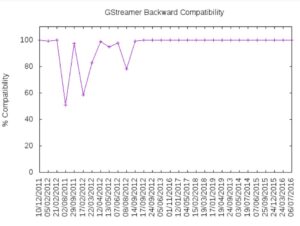 Some software projects, particularly programming languages and operating systems, by virtue of being governed either by a strict set of standards and/or the requirement to offer very strong guarantees about backward compatibility, change very rarely. That is, they have a well-defined ABI from the start and it very rarely changes thereafter, with is no period of stabilization as such. LibC++ (†) and GlibC (†) are good examples of these sorts of projects. 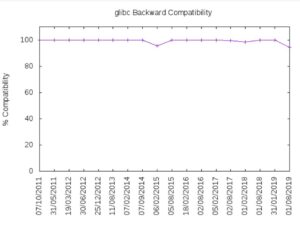 Other software projects will support a stable ABI version for some period of time, usually months or more often years, with planned periodic ABI breakages to introduce new features or to facilitate re-factoring. These breakage’s are often timed to coordinate with the lifecycle of consuming software such as operating system distributions (Debian etc) or higher level applications. LibAV (†) and ffmpeg (†) are clear examples of this kind of project. 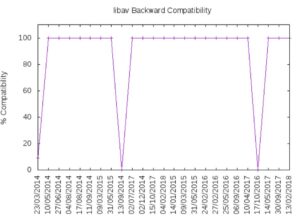 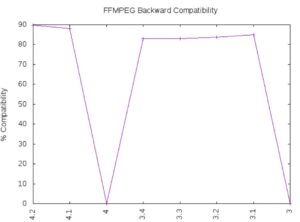 Finally, some software project’s by virtue of a design philosophy or simply because they are that bit earlier in their lifecycle, choose to offer fewer guarantees of ABI compatibility. DPDK and Boost projects are both good examples of this kind of project. 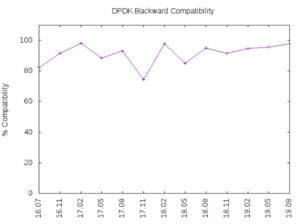 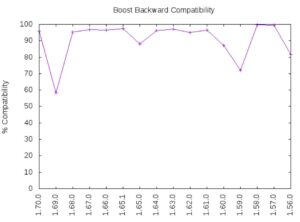 Why are ABI Breakages considered bad?

Modern software ecosystems are built on a hard commitment that binary interfaces will be carefully managed. When this commitment does not hold things fall apart rapidly, with applications failing to start or randomly crashing.

Imagine a world in which there was no guarantee that applications installed from an ‘app’ store or repository would just work, imagine how frustrating that might be for users? Today this all just works and we take for granted that behind the scenes, engineers are working hard to ensure that updates don’t break ABIs and therefore do not break applications. However many will remember a time when such guarantees either didn’t exist or were hard to enforce.

And the consequences? Naturally defensive behaviours will follow, developers will start to statically link with their dependencies and become slow about picking up the latest version of those dependencies as being too risky. In the worst case, some developers might start looking for another ecosystem that doesn’t break their code and their application quite so much.

And this worst case, happens more often than you might think …

Miguel De Icaza is one the fathers’ of the GNOME Project, one of the best desktop environments for Linux. For a few years in the late 90s and early 00s, it looked like Linux desktop distributions based on GNOME had a real shot with competing with Microsoft Windows to become a popular desktop operating system. However despite all the excitement, huge community effort, and commercial support from major Linux vendors, it never really happened. Miguel explains why in his blog post What Killed the Linux Desktop (worth a read).

“Backwards compatibility is not a sexy problem. It is not even remotely an interesting problem to solve. Nobody wants to do that work, everyone wants to innovate, and be responsible for the next big feature in Linux.

So Linux was left with idealists that wanted to design the best possible system without having to worry about boring details like support and backwards compatibility.

It’s a sobering message, ABI stability done right helped contribute to Linux’s vast success as an operating system and done wrong, it hurt it’s popularity as desktop operating system. The risk is for project’s with an unstable ABI is clear, eventually your consumers will start looking for something else that doesn’t break their code quite so much.

DPDK’s has had an ABI policy committing the community to preserving the DPDK ABI since 2015.

Note that the above process for ABI deprecation should not be undertaken lightly. ABI stability is extremely important for downstream consumers of the DPDK, especially when distributed in shared object form. Every effort should be made to preserve the ABI whenever possible. The ABI should only be changed for significant reasons, such as performance enhancements. ABI breakage due to changes such as reorganizing public structure fields for aesthetic or readability purposes should be avoided. – DPDK ABI Policy, 19.08

The DPDK ABI policy encourages contributors to be mindful of consumers when making ABI changes. What is changing in DPDK, is that this policy is now evolving to offer consumers more guarantees of future compatibility.

How we are changing DPDK?

Recently the 6th revision of a new ABI policy was posted to the community, intended to start the process of moving DPDK out of the last category of projects described above and providing it’s consumers with more certainty around future ABI compatibility. This policy has been approved in principle by the DPDK Technical Board and will become the new policy following the DPDK 19.11 LTS release.

The intention is to continue to provide DPDK’s consumers the best possible features and performance for building dataplane applications, now with the addition of clearer upgrade paths and a stronger commitment to backward compatibility.

The change will mean that DPDK will now follow a pattern similar to that described for the LibAV and FFMpeg projects above. A pattern that is characterized by periods of ABI stability with periodic ABI breakages to facilitate change. In this way, a DPDK “major” ABI version will be declared aligned with the DPDK LTS release, and then supported in all the quarterly release over the year following the LTS release.

What does this mean for Contributors?

At a high-level, it means that the community will become more deliberate about how the DPDK ABI is managed. Any new features will be required to maintain existing interfaces between LTS releases, and in general ABI changes will receive more scrutiny than has been the case in the past.

To be absolutely clear, the DPDK ABI can change while ABI compatibility is being maintained.

This means that the DPDK community will guarantee, that applications built and dynamically linked against the most recent LTS release will continue to work, without requiring a rebuild, through the quarterly releases for the year following the LTS release. The DPDK ABI can and will continue to evolve during this period, adding great new features and improvements, so long as ABI compatibility with the LTS release is preserved.

Changes that are so dramatic as to require an ABI compatibility breakage will now need to wait until the next ABI breakage window at the next LTS release.

How do we prepare for this change?

The initial period of ABI stability will run for one year following the v19.11 release. This was designed to minimize disruption to the community, as most contributors are targeting the LTS release with their changes. Currently ABI breakage windows are aligned with LTS releases, meaning that even in the worst case event of an unavoidable ABI breaking change, the impact of the new policy will be minimal.

This has been designed to start to familiarize the community with the requirements of ABI compatibility, while still permitting ABI breakages for the next LTS release. The ABI policy will then be reviewed after this initial year, with the intention of lengthening the stability period and period between ABI breakages to two years.

If you are interested in the next level of detail of how the new policy will work, can review the patch.